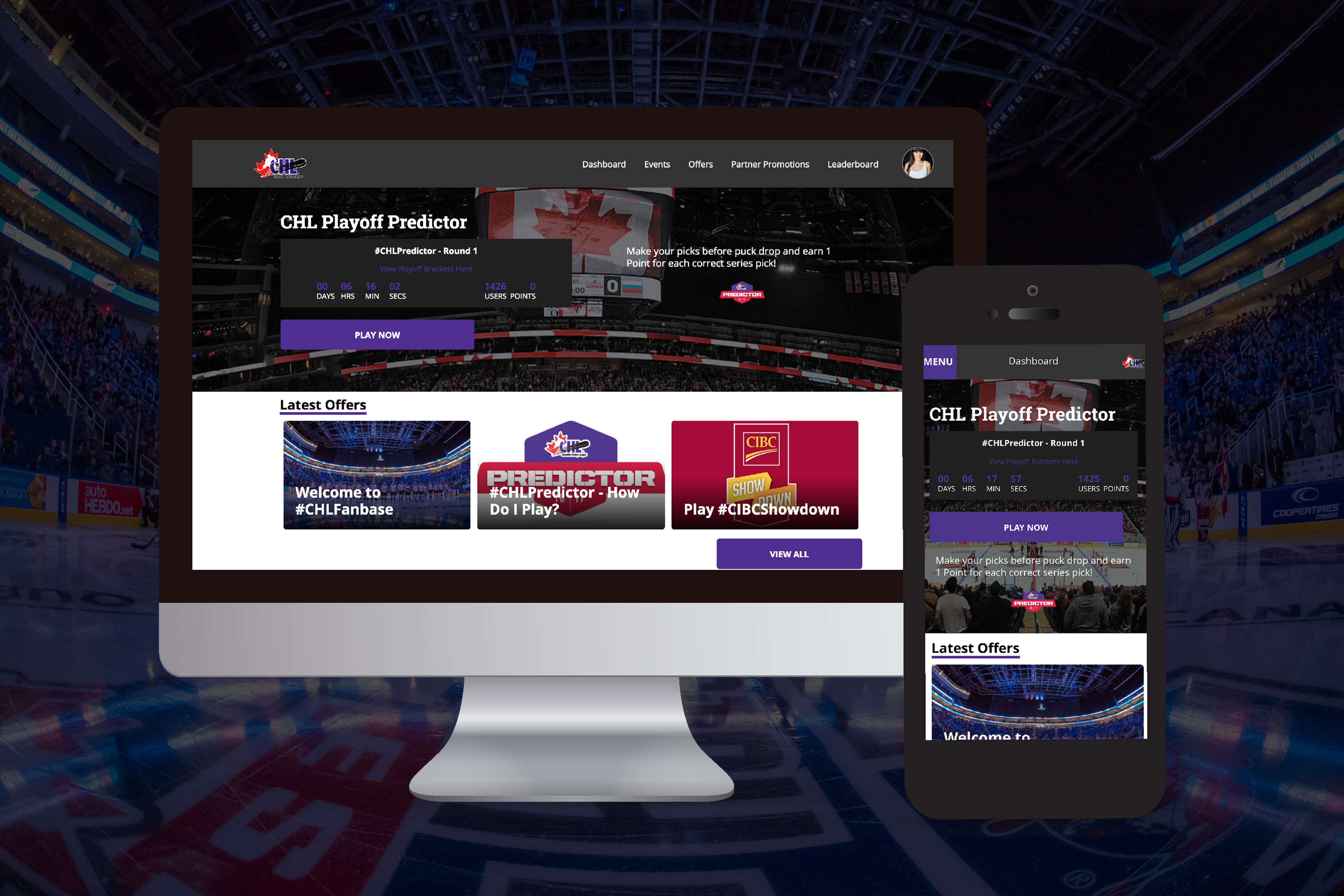 Toronto, (March 21, 2017) – The Canadian Hockey League (CHL) kicks off the start of the OHL, WHL and QMJHL playoffs today with the launch of CHL Fanbase – the league’s new digital fan engagement platform. Developed by leading fan engagement company, Stadium Digital, the platform awards points to fans who engage with the CHL’s Playoff Predictor game and gives exclusive access to contests, promotions and events.

The highlight of the platform launch is the new CHL Predictor game which allows fans to predict the results of OHL, WHL and QMJHL playoff series. Participants all have a chance to win a trip to the Mastercard Memorial Cup.

“Whether it’s entering a contest, predicting a playoff winner or engaging in partner promotions, CHL Fanbase is an incredible way for us to thank our loyal fans for their ongoing support and engagement,” says Mark Dickie, Senior Manager of Digital, CHL. “Playoffs are the best time of the season. As we lead up to the Mastercard Memorial Cup, we can’t wait to have fans join in on CHL Predictor and guess the outcomes for what are sure to be some compelling series.”

“CHL Fanbase is natural digital extension of our services for the CHL, enabling the league to connect with fans on a whole new level,” says Mark Silver, President of Stadium Digital. “Using our proprietary engagement platform not only allows the CHL to recognize and reward its fans, it also empowers the league and teams to track behavioral fan data and ultimately help the CHL to develop custom promotions, programs and other partner initiatives that drive further engagement.”

The new CHL network of 78 sites is operating at full capacity with mobile dedicated features designed to optimize team, league and special events focused on the fan experience delivered over all devices.

“The launch of the new CHL network marks an important milestone in how we connect with our fans and bring them closer to the game,” says Mark Dickie, Senior Manager of Digital, CHL. “Stadium Digital’s network and fan engagement platforms have been a wonderful complement to our content strategy allowing the CHL to deliver more value to teams, sponsors, and most importantly, the fans.” 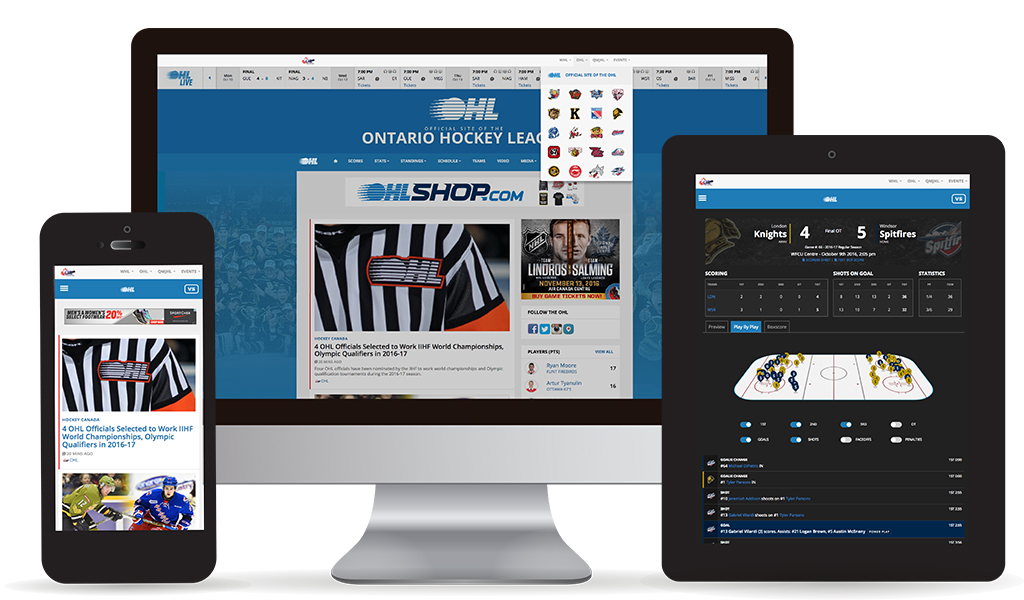 Toronto, (October 11, 2016) – The Canadian Hockey League (CHL), along with its partner Stadium Digital, dropped the puck on the 2016/17 hockey season with a new and fully mobile responsive website network across the league’s slate of teams, leagues and special events. This includes 78 sites for all teams in the Ontario Hockey League, Western Hockey League and Quebec Major Junior Hockey League along with the Mastercard Memorial Cup, CIBC Canada/Russia Series and the Sherwin-Williams CHL/NHL Top Prospects Game.

The new CHL network, created by Stadium Digital, features a dynamic new content hub and responsive technology that streamlines the fan experience across all devices. Highlights of the new network include:

“The launch of the new CHL network marks an important milestone in how we connect with our fans and bring them closer to the game,” says Mark Dickie, Senior Manager of Digital, CHL. “Stadium Digital’s network and fan engagement platforms have been a wonderful complement to our content strategy allowing the CHL to deliver more value to teams, sponsors, and most importantly, the fans.”

While all CHL digital content lives on a single network managed by Stadium Digital, the infrastructure allows individual teams to customize the look of their sites and develop their own unique content and sponsorship opportunities to serve their fans and team partners.

“It has been an exciting process and we are thrilled to see the full 78-site network take full effect as the puck drops on another season of major junior hockey,” said Mark Silver, President of Stadium Digital. “We are looking forward to continuing to work with the CHL leagues and teams to showcase the world’s top hockey prospects across the league’s digital platforms.”

Over the last 4 months we have been steadily rolling out new websites for each of the regional leagues, teams and special events for our client, the Canadian Hockey League. The combined undertaking encompasses 78 English/French digital properties, which are built on a single platform managed and maintained by Stadium Digital.

The completion of this rollout is a turning point for the CHL, as it now has a fully responsive platform on a common code base that leverages a customized multi-site bi-lingual WordPress theme. Like all projects of this magnitude, reaching the milestone of completion is an accomplishment to be celebrated and a time to reflect on the dedication and collaboration of the project team. I would firstly like to recognize the leadership of the CHL’s Sr. Manager of Digital, Mark Dickie, who has been our partner along this journey, supported by a strong group representing the regional leagues:

Another key contributor to this project throughout has been Denis Demers, the Head Statistician for the QMJHL. Denis’ singular focus on delivering to CHL fans one of the most comprehensive stats offerings in sports is a critical aspect to the success of the new digital platform.

The sheer scope of this project required Stadium Digital to work closely with several companies, such as Hockey Tech, the statistics provider of the CHL. Other companies involved in this project were: Webonise for hosting and migration, Signal UX for design and user experience, and PairShaped for technology architecture. I would also like to recognize the dedication of 2 employees at Stadium Digital, Mark Banks and Jeff Mugleston, who have been integral to seeing this project through while collaborating with the large stakeholder group assembled for this project.

Thank you to everyone involved in getting to this important milestone. We look forward to now iterating and innovating with this new platform in an effort to grow the fan base and business of the CHL. 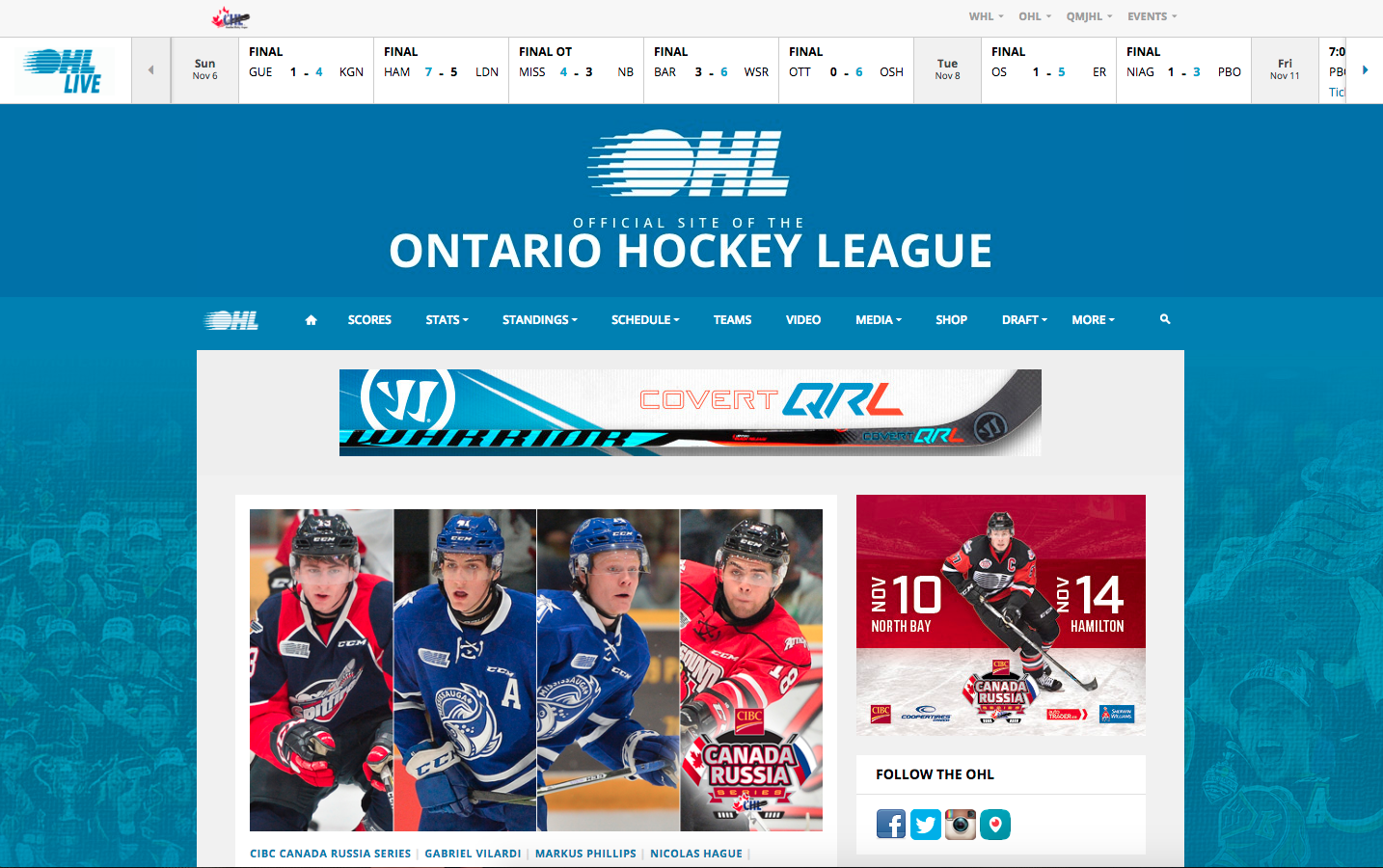 Following in the footsteps of NHL.com, which partnered with Major League Baseball Advanced Media (MLBAM) and overhauled its redesigned digital product this season, the CHL is upgrading its network of websites, beginning with the relaunch of the Ontario Hockey League site on Wednesday.